“I would like to present a case to illustrate my approach to treating inflammatory bowel disease:

Russell was a thirty-two-year-old male with severe ulcerative colitis, an autoimmune disease in which the body attacks the colon, leading to inflammation and loose stools.

Despite being on the anti-inflammatory drug ‘mesalamine’, he still had elevated levels of C-reactive protein (CRP), a blood marker that indicated persistent inflammation. He had eight to ten bowel movements per day with blood and mucus in his stools. He had been on a strict Paleo diet for six months, a diet that consisted of eggs, red meat, fermented dairy products, sauerkraut, and a limited number of vegetables.

After talking to him I realized that he had excess Pitta, which was manifesting as inflammation in his colon and causing bloody diarrhea as well as a frequent sour taste in the mouth. I realized the foods that he was eating were all very hot in terms of their qualities and properties. While meat, eggs, and dairy products are wonderful nutrient-dense foods, in his case they were actually not beneficial because of their heating properties.

I had him start a modified Paleovedic Detox diet without meat, eggs, or dairy products. For three weeks, he consumed bitter greens such as arugula, spinach, and kale, which have very cooling, energetic properties. I also encouraged him to eat khichadi once a day, which he was open to doing even though it contained rice (which is not strictly Paleo by some definitions), because of its soothing effect on the gut. I encouraged him to liberally incorporate turmeric into his cooking. I also advised him to temporarily reduce consumption of sour foods such as sauerkraut because they can potentially aggravate Pitta. Lastly, I recommended that he take a supplement containing Boswellia serrata, a herb that balances Pitta and is often used to reduce inflammation.

At a three-month follow-up visit, he reported that his symptoms had improved by 80 percent. He was having two to three bowel movements per day and there was no blood or mucus present in his stool. He was no longer experiencing the sour taste in his mouth. After continuing to work with me over the next year, he was weaned off mesalamine and was able to control his symptoms using diet and select supplements.
Therefore, we can see that a Pitta pacifying diet is absolutely essential in inflammatory bowel disease.

A Pitta-pacifying diet should include:

The fundamental role of changes in the intestinal bacteria may need to be addressed with the strategies that we reviewed earlier during the presentation, such as using probiotics, prebiotics, and fermented food to shift the beneficial bacteria in the microbiome.”

About The Ayurveda Experience

The Ayurveda Experience is a one-stop portal for all things Ayurveda. Learn Ayurveda through our educational courses, webinars and articles, shop Ayurveda products in our online store and connect with an Ayurvedic practitioner through our web directory or iYura app! http://www.theayurvedaexperience.com 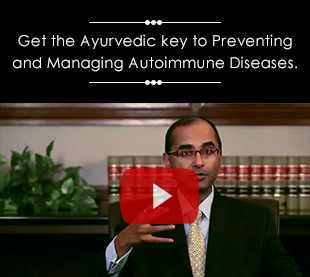